Due to its popularity, Roblox is available on PC, Mac, Android, and Xbox.

Although that’s great news for both the player base and the product’s longevity, it also comes with a downside, such as more room for platform-specific errors.

The 918 Roblox error is an uncommon issue encountered only by console users, and it prevents the players from logging into the game.

If you’re dealing with it at the moment and looking for a solution, this guide will provide the right information to fix it efficiently.

Due to the large Roblox player base, almost every error encountered on the platform has a lot of coverage and descriptive reports on various support forums and websites.

However, when it comes to the 918 Roblox error, things are a bit different.

This isn’t such a common problem, and since it is exclusive to console players only (filtering the majority of the player base), there isn’t much information on it available.

Dealing with such an error can be frightening as there are almost zero success stories about it, and the “Account Restricted. Error Code 918” message accompanying it can also be quite worrying.

The 918 Roblox error occurs when the player tries to sign in to Roblox through their console, but the attempt fails and the player is instead shown the panel for the above-mentioned problem.

The majority of users reported this issue on the Xbox console, but some mentioned experiencing it on PS4 as well. So far, there haven’t been any mentions of this error on PC, so we can conclude that it’s console-exclusive.

Let’s take a look at the methods that can fix the 918 Roblox error.

Fix 1: Restart Your Router And Re-Log To Your Console’s Account

Various connection issues can cause Roblox to show errors such as the 918 one when trying to log into your account.

The easiest way to fix these connection issues is to restart your router and re-log into your console’s account.

This method helped users overcome the problem immediately, which is why we recommend trying it first.

This simple method should clear the 918 Roblox error right away. If it doesn’t, take a look at the section below for a different approach.

Fix 2: Reinstall The App And Reboot Your Console

Another possible fix for the Roblox 918 error code is to reinstall the app. To make sure you do this right, follow the steps below:

Now you should no longer experience the 918 error when trying to log into the Roblox servers.

This method takes slightly longer compared to the first one, which is why we recommend trying it only if the first one doesn’t solve the problem.

Now you know more about the 918 Roblox error, a not-so-common issue that appears only on consoles, but mostly on Xbox one, with a few reports on PS4.

Although a vague error without much information about it available on the internet, the 918 error is easily solvable by applying simple fixes such as the ones mentioned in the guide above.

Hopefully, this helped you resolve the issue permanently. 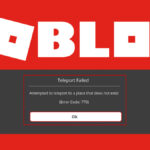