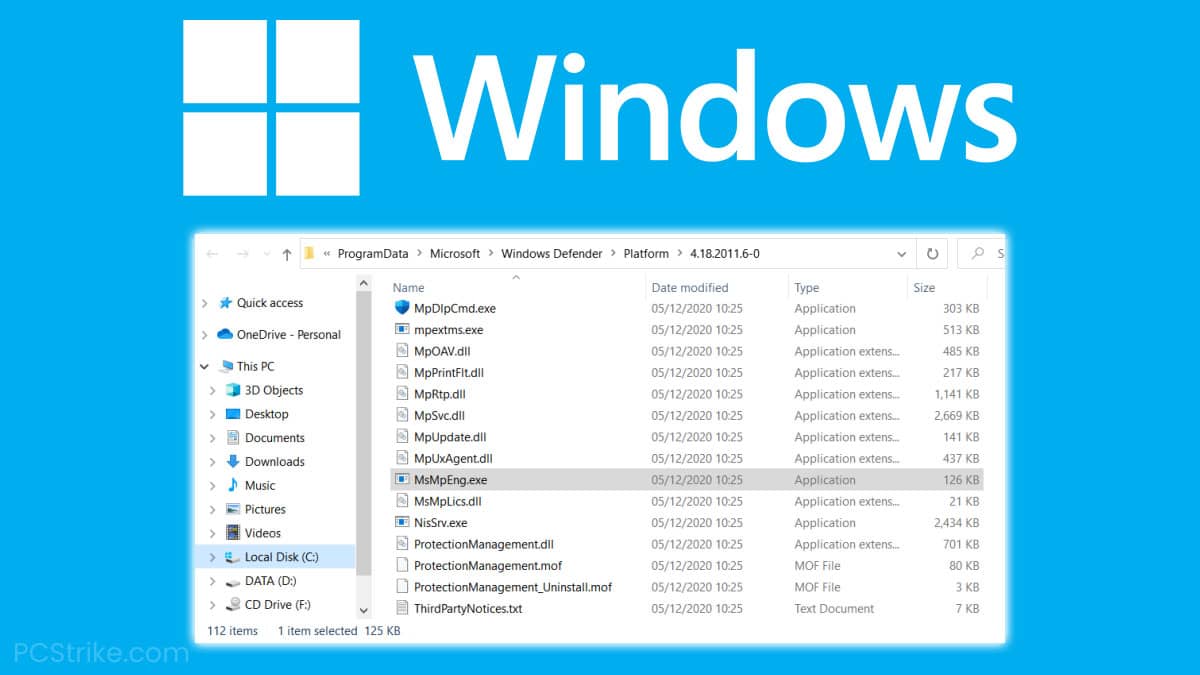 Knowing which processes run in the background while using your PC is crucial for maintaining optimal performance and health.

With that said, noticing that a seemingly unknown process “drains” the majority of your CPU’s power can be worrying.

Unfortunately, this is the case with msmpeng.exe, about which many Windows users ask questions.

In this guide, we’ll analyze this process, help you understand what it is, and most importantly, help you prevent making your PC practically unusable by using so much processing power and resources.

Without further ado, let’s get into it.

When our computers act strange and become slow or unresponsive, the first thing we check is the Task Manager. If everything seems right in the applications section, usually, the next step is to check the Processes tab.

That is when users notice the msmpeng.exe high memory usage and wonder what it is and if it’s harming their PC in any way.

The truth is, this process can and almost always does take a lot of CPU resources, but it’s not harmful in any way, and you shouldn’t disable msmpeng.exe.

However, users who aren’t sure of this are quick to panic and think it’s some sort of malware or even a hidden cryptocurrency mining tool, as some users thought.

Needless to say, it’s the exact opposite.

As mentioned above, msmpeng.exe is not a harmful file or process in any way, but this is not enough of an explanation to justify allowing it to run on your PC, so let’s get into the details.

Msmpeng.exe is “short” for Microsoft Malware Protection Engine. Some refer to it as Antimalware Service Executable.

The Msmpeng.exe process constantly runs in the background and checks your computer for potential threats. This includes viruses, worms, malware, and other harmful software.

Because the process constantly runs in the background and does a thorough scan, which happens in real time, it’s normal for it to be as resource-heavy as it is.

Now, does this justify the 100% CPU spikes and the rest of the performance-affecting effects this process has on your system? Not really, but here’s what you need to know.

The Windows Malware Protection Engine is meant to run in the background with a lower intensity so you can keep using your PC without even noticing it. Also, Windows tries to figure out the times during which you are not using your computer so that the scan can run without causing any interruptions at all.

Unfortunately, this isn’t always the case. Some users report that it’s making their PC unusable, which can be a frustrating problem, especially if the computer is mostly used for work.

Should I Remove The MsMpEng.Exe Antimalware Service Executable?

Many Windows 10 users are unsatisfied with how the Microsoft Malware Protection Engine works.

Some say it’s bothering them so much that they wish to uninstall it from their computers.

Now, whether this is a smart idea or not, we cannot say for sure because it really depends on a few different factors.

If you are well educated about cyber security and know how to avoid downloading and storing harmful files on your system, you may not need it as much. But, if you consider yourself a beginner Windows 10 user and you often find yourself downloading files that end up being flagged as malicious, it’s not such a good idea to uninstall msmpeng.

Note: We don’t recommend stopping msmpeng.exe or removing the service from your computer, as most of the issues with it are resolved in the later Windows updates.

However, there’s also a third option, one that we recommend the most if you really want to stop or uninstall the Microsoft Malware Protection Engine process that takes away your CPU power during unexpected times.

Read into the next section for more information on that.

Replacing Msmpeng.exe With A Third-Party Antivirus

Leaving your computer unprotected is not a good idea at all. Especially when because cyber-attacks and virus infections are constantly on the rise.

However, if you decided that you need something more predictable to protect your computer, and you stopped the msmpeng.exe from running on your system, we recommend a replacement.

There are many options available when it comes to antivirus and anti-malware programs, but if you aren’t sure where to start, we have a helpful guide that will point you in the right direction.

If, despite the msmpeng.exe high CPU usage issue, you still want to keep it on your PC, there are a few things you can do to keep it running but without experiencing any interruptions.

Here’s a helpful video that guides you through various fixes and solutions that worked for many users.

Note: Some of the things you see in the video (specifically the interface in the Windows panels that are being showcased) may look entirely different on your computer. This is because, through the constant Windows 10 updates, the appearance of some of the panels changed, and some functions and elements were moved to different locations.

Additionally, some users reported the msmpeng.exe Windows 10 high CPU use problem as something that happens only while using specific browsers, such as Firefox.

If you’re experiencing this, we recommend switching to a different browser, such as Chrome or Brave. It’s the easiest way to solve the problem without having to “tweak” Windows settings and engage in other, more complicated processes.

Last but not least, you could be experiencing the so-called “Microsoft Defender Scan Loop,” which is basically the msmpeng.exe constantly scanning itself, trying to figure out if it’s malware or a safe process.

This can cause the process to be stuck in an endless loop that just takes a lot of your computer’s processing power with no real benefit, but luckily, there’s a fix for it.

Adding Msmpeng.exe As An Exclusion In Microsoft Defender

The steps below will help you add the msmpeng.exe as an exclusion in Microsoft Defender so you can successfully prevent it from scanning itself.

Now when the scan happens, you shouldn’t experience such high CPU spikes that may be preventing you from using your computer normally.

With that said, you now know how what the Msmpeng.exe is, whether you should keep it enabled on your computer, and how to replace it in case you’re not satisfied with the way it works.

Please note that disabling the msmpeng.exe process can sometimes cause more harm than good, so unless you’re sure that you’re protecting your computer from malicious files and processes in any other way, we don’t quite recommend doing it.